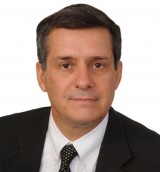 Gerard Marino is originally from Long Island, New York. He and his wife Barbara moved to Southwest Florida in 1978, before I-75 was built and when Daniels Parkway was a field. After driving along the coast from Bonita Beach Road to Fort Myers Beach, they knew they had found their new home. When asked what he loves most about his current home Gerard says, “The simple, unassuming lifestyle that is so normal here.” He likes that he can talk to a client while walking the beach, fishing or riding his bike.

Gerard has been a broker associate with CornerStone Coastal Properties since June of 2010. He specializes in commercial and income property, as well as fine homes, and holds the prestigious CCIM (Certified Commercial Investment Member) Designation. It is what could be considered the PhD of real estate.

Other facts about Gerard:

His hobbies include collecting fine art and visiting museums in such places as New York City, Paris and Nice.
He and his wife Barbara have two grown daughters, Jessica and Karen, both of whom graduated from Florida Gulf Coast University.
His real estate expertise has allowed him to become a contributing writer for the News-Press Commercial Connection column.

Custom home with Direct Sailboat Access looking straight down the canal with Western exposure! Only minutes to the Gulf of Mexico! Come experience the best SWFL has to offer in this one of a kind home featuring 7 bedrooms- 5 en-suites, 6 bathrooms an

GULF HARBOUR GOLF MEMBERSHIP AVAILABLE FOR SEPARATE PURCHASE WITH THIS HOME-NO WAITING. Spectacular 9th floor Must See End Unit. Custom, one of a kind, unique Riverfront home. From this fully furnished crisp & clean condo you have BOTH beautiful sunr

Extremely rare opportunity to own one-of-a-kind property in the historic Riverside neighborhood of Old Fort Myers. A substantial restoration over a 2 year period maintained the home's historic integrity while adding the most modern of amenities. The

Well priced! Fought the hurricane well! This is a high elevation home. It is furnished and move in ready. Gulf access, above flood plain and custom built home on a cul de sac in Whiskey Creek. Offering over 3,000 sq.f. of luxury with 4 br, 3.5 ba -or

GREAT OPPORTUNITY FOR INVESTORS! $80,400 annual gross income with room to increase. This Cape Coral 5 plex is for sale with 2 bedrooms 2 bathrooms in each unit. Over 1090 SQFT of living area per unit. Each unit has its own washer and dryer utility ro

Situated in a private neighborhood in the heart of Estero you will find this very well appointed home featuring 3 beds, 3 baths & den. The open floor plan has a coastal flare including light wood plank tile floors, high ceilings and kitchen open to a

SPACIOUS SAILBOAT ACCESS, no bridge, 4 Bedroom POOL HOME. No need to look further, this is the Florida home you've been dreaming of! Much sought after 2200+ sq. ft. single family, saltwater canal home in the center of paradise on very quiet street. T

Old Fort Myers - Beautifully updated spacious Pool Home in a fantastic location just off historic McGregor Blvd. Features include 4BR/3.5BA plus a Cabana/Mother-In-Law Suite just off the pool area with a full bath. This property is NOT in a flood zon

Exceptional value for this builder grade luxury High Rise Condominium unit! Located in the Downtown Fort Myers River District, in the most revered luxurious riverfront community, High Point Place! As you walk through the double door entry, from your

Country Club Living at its Finest! This Spacious, Well-Appointed Home Boasts 3153' of Living Area, A Huge Lanai Under Truss, A Tandem 3 Car Garage (bring your golf cart!), Gorgeous Lake & Golf Course Views from the Front Porch, and a Private, Wooded

IF QUALITY AND ATTENTION TO DETAIL MATTERS TO YOU, THIS REMARKABLE HOME IS A "MUST SEE"! Built as an Arthur Rutenberg Model, this gorgeous home is truly timeless. The 2385' LA includes 3 BR, 3 BA, DEN, formal & casual dining, & a well-planned kitche

If you like the idea of living in a high-rise but don't like the idea of going up and down an elevator, you do NOT want to miss this beautiful 1st floor condo! There is not a corner of this unit that has not been redone. All finishes are of the fine

Make this your Real Estate Reality with this fantastic homesite starting you off with a clean canvas to create and design your own Coastal Retreat. Just a short walk to one of the best shelling beaches in the world “Blind Pass Beach” along with 3 Re

This Gorgeous 2021 Built Home is a MUST SEE and is AVAILABLE NOW! Move-In Ready and Full of Desirable Upgrades Throughout! This beautifully maintained home is being offered TURNKEY FURNISHED (personal items excluded) and has 1861' LA with 2 bedroom

In the heart of Old Fort Myers is where you’ll discover this charming English Cottage on an oversized lot situated just steps to the neighborhood Riverfront Park where you can enjoy beautiful sunsets and interact with friends and neighbors. This vint

BEAUTIFUL MODEL PERFECT POOL HOME - This stunning 3BR+Den/2BA is situated on a corner lot along a lovely street surrounded by other high-end homes. Features include 14ft ceilings throughout, gorgeous 32in tile floors, upgraded granite in the kitchen

Welcome to Reflection Lakes. This modern 4+/3 home backs up to Lakes Park providing a private environment within a community with wonderful amenities. It has been remodeled with high end finishing touches. It has a guest room, full bath and an office

This unique 2 building property located in downtown Fort Myers is an opportunity for an owner to live in one and rent the other or a great work/live situation. Zoned U-CTR (Urban Center Commercial), there are many other applicable uses. Easy walk and

THIS HOME HAD HURRICANE IAN FLOOD DAMAGE! A PHENOMENAL INVESTMENT OPPORTUNITY! CASH ONLY! THIS HOME COMES WITH: (a 2015 Bennington, 22ft, saltwater series, pontoon boat- 90 hp)!!! After a catastrophe comes opportunity. Take advantage of this 1980's

Rarely available, end unit, a 2 bedroom with den. This Colonnade floorplan is a very the desirable large end unit. This condominium was damaged by hurricane Ian. It is now in the process of remediation and overseen by the Association. There will be a

REAL ESTATE REALITY? SWFL is and will continue to be a destination. Make this LAKEFRONT Condo Today’s purchase, for Tomorrow’s security for your Coastal Retreat. This 2BR 2BATH + DEN, W/ATTACHED GARAGE, Lge Lanai, 2nd Flr Condo shows light and brigh

PRIDE OF OWNERSHIP SHOWS THROUGHOUT THIS LOVELY HOME. With 1916' of living space & great views from the abundance of windows, you'll feel like you're in a single family home while living the carefree lifestyle a condo offers. This SWEET RETREAT has 2

This home is ready for new owners! Featuring a screened-in front entry the property is inviting from the moment you pull up. Boasting new AC, windows and sliding glass doors with 3 large bedrooms and 2 remodeled bathrooms! All bedrooms feature walk-i

Beautiful move-in ready pool home on an extra large corner lot in the gated community of Varsity Lakes. The 3 Bedroom/ 2 Bath home has been updated and well maintained. Perfect for outdoor living, the home features a solar heated pool with large sun

Must See End Unit in Marbella On Cypress with over 1900 sqft. of living space is offers tons of Natural Light * Beautiful Landscaped View * Home has barely been lived in and is Move-In Ready * Downstairs offers a Spacious Living Room, Kitchen with Gr

BUILD YOUR DREAM HOME in Sunny SWFL! Assessments in & paid! Cleared lot, great neighborhood, lots of new construction around. Owls are currently on the property, but they can be relocated by an environmental agency. See confidential comments. Close t

READY TO BUILD ON LOT IN GROWING NW CAPE CORAL SURROUNDED BY NEW CONSTRUCTION. VERY CONVENIENTLY LOCATED CLOSE TO PINE ISLAND ROAD, MAJOR SHOPS AND RESTAURANTS. ON A QUIET RESIDENTIAL STREET OF NEWER HOMES. IT'S A NEIGHBORHOOD OF MOSTLY NEWER HOMES A

Very nice canal front lot on the Frontier Canal in Northwest Cape in area of newer homes. Lots of new construction in this part of Cape Coral. Close to Mariner High School and shopping. Quick access to Veterans Parkway. This is a great lot and won’t

FRESHWATER canal opens up to Mull Lake!! Clear & ready to build on!! SOUTHERN rear exposure, keeps the sun outback over the pool all day!!! Conveniently located, within minutes of US 41 making it easy to travel up & down the Gulf Coast! Great neighbo

Larger Lot on Paved Dead-End road next to Canal. Great building site for your next home. Over 1/4 of an acre. Easier access to I-75, Lehigh Acres shopping and schools. Up and coming northwest section of Lehigh. Near Buckingham - Cementery Road -

Great property to build your dream home on. The lot is located just off Sunrise Blvd and is close to to the newly expanded HWY 82. Also close by is RSW International Airport, Shopping, Spring Training Facilities for Twins and Red Sox and local beache